Why did acoustic guitars grow bigger?

I’ve always been fascinated by history, endeavouring to see the big picture with help of the past. The history can teach us so much. As it is with most manmade things, the electric guitar is a logical continuation to (and deviation from) whatever existed before. It started from a need. The jazz guitars and steel-stringed flat top guitars grew bigger and louder for the simple reason that the instrument couldn’t otherwise been heard by the ever-growing audiences.

Spin the wheel in motion

Then came the electrical amplification. The first “electrified acoustic guitars” started to pop up here and there in the 1920’s and early 1930’s. There are countless stories and myths regarding who exactly invented what. Let’s not dive into that.

Whatever the true origin may be, the electric guitar we know today was without a doubt popularized by a few guitar factories in the 1940’s and early 1950’s. These companies succeeded to spin the wheel in motion in such powerful way, that it ended up shaping up in its wake the whole pop culture revolution in remarkable and unforseeable ways.

Yes – I’m perfectly aware that I’m walking you to the actual topic, playability of an electric guitar, through the scenic road. Please bear with me for a few moments more. The electric guitar does not depend on the soundboard and soundbox as elemental structures in order to make the instrument audible.

Technically speaking this deviation from the past would give guitar makers and factories great freedom regarding the shapes and other design elements of the instrument. And yet, the most popular electric guitars are in fact quite similar looking to acoustic guitars. Yes, maybe a bit smaller, but still easily recognizable as somewhat traditional guitar shapes. Why so? GUITARS FOR MEN… BUT WHAT ABOUT WOMEN?

The archetype of electric guitar

Why does the majority of popular electric guitars look like a smaller, little bit modified acoustic guitar? Lack of imagination? I don’t think so. To me, the answer is two-fold:

1) The form follows function. Simply put, the best functioning features and shapes have survived and prospered through centuries. The inevitable wheel of evolution.

2) The archetype of ‘guitar’ stands firm – aesthetics and all – with multi-faceted relevance, in our musical heritage. Notice, that this is not the same as saying: “that’s how it’s always been so that’s how it will remain”. The guitar has a strong emotional connection to our cultural identities through music. Music is why the guitar came into existence in the first place!

How about giving the evolution a little push?

There are of course many exceptions, too. Certain modern genres of playing require special guitars. A great example of this is Steve Klein‘s approach. The legendary ‘K’ model Steve designed for Steinberger back in the 1980’s was a revolutionary deviation from the past. And for a good reason, too. Steve’s work has inspired many musicians and luthiers since. It’s fair to say that without Steve Klein giving the guitar evolution his little nudge back in the day, modern “shredder friendly” instruments by companies such as Strandberg wouldn’t most likely exist.

Should a guitar for women be different?

Another interesting aspect is that while playing electric guitar is a diminishing trend as a whole, it is simultaneously becoming more and more popular among women. Let’s face it – the whole phenomenon of guitar heroism of the past was almost single-handedly dominated by men. The electric guitars were always designed by men, to be used mainly by men. So now, as this is slowly changing, it is invigorating to observe and be part of this fresh deviation from the past.

Is the electric guitar, in the variations we see it today, shaped optimally for women? Or – if the electric guitar would have been designed mainly to be used by women back in the 1940’s through to 1960’s, would it be different now, as we know it today? If yes, in which ways different? And… why should it be different? Ergonomics designed for a woman’s body? Aesthetics that appeal for women? Does it tie also into the changing gender roles? An intriguing phenomenon of the modern age, that will slowly unfold in the coming years.

The Queen of Blues

Our first project on this field is a signature guitar model for the Finnish award-winning blues guitarist Erja Lyytinen. I designed the first prototype in 2018, and the development is ongoing. Very exciting! Another example of a modern electric guitar designed for a woman is the St. Vincent model by Ernie Ball / Music Man. DOES PLAYING GUITAR GIVE YOU SHOULDER PAIN?

Now we’ve entered to the very heart of the topic. Playability – that is all about form following the function. How does the instrument balance on my lap when I play sitting down? What happens when I stand up and hang the guitar on my shoulder? Which scale length is the most comfortable and best functioning in regard the string tension and tuning stability? Which neck shape is the best one? How should the controls of the guitar be laid out? Is the instrument too heavy? Too light? Many of these questions don’t have one objective answer.

Design – much more than the looks

What does it mean to have a “well balanced playability” in an instrument? Even if my designs are rather classic in terms of aesthetic appeal, I’ve paid close attention to how every one of my instrument designs balances when being played.

How to play more relaxed?

The Unicorn is a good example. A Gibson Les Paul style guitar is often back-heavy. This means, that when you have the guitar on your lap, it easily falls backwards, and to avoid this from happening, you need to use energy to hold the guitar in an optimal playing position. This not only disturbs your focus from playing, but is also one of the reasons causing pain in the shoulders, neck and back.

To improve the balance of the guitar, I have shifted the waistline of the Unicorn body in such way that the balance point is right. The guitar stays in a good position without forcing it, and so your playing becomes more relaxed. YOUR MUSCLES REMEMBER YOUR GUITAR

The scale length of the instrument affects a number of things, and not least the playability. Some feel equally comfortable playing instruments with a variety of scale lengths. They often say that different guitars inspire them to play differently.

Talking about getting inspired of different guitars – one of my professional clients, Juha Björninen, plays both right- and left-handed instruments. He is a session player, and has told me that when he records various tracks, he sometimes plays some of the tracks left-handed, cause he has a clearly different style that way, making the music livelier!

Often players have what they call their main guitar. One might feel best at home with a 24,75″ scale length guitar with 4,5° neck angle, whereas another gets it going best with the 25,5″ scale length and a bolt-on neck without a tilted neck angle. A matter of taste, but even more than that, it is a matter of what you’re used to playing, over a long period of time.

When you’ve played a specific style guitar for 20 years, your hands know intuitively how much energy does it take to bend the high e-string up one and half steps from 15th fret. You know where to end the slide up the neck, landing the right note even in a dark room where you can’t quite see the fret markers. Your muscle memory knows the instrument inside out.

That is why changing to a completely other style guitar often feels awkward to start with – until you play it enough so your body gets used to it. The other style instrument even might teach you another musical language or inspire you to make different songs!

Is a thin neck faster?

The neck profile has a big impact on the playability of a guitar. You could assume a small neck fits you better if you have small hands – but that’s not always the case. Some guitarists with big hands enjoy playing small necks – and vice versa.

There are many factors contributing into whether a guitar neck feels big or small. Everything matters: The width of the fretboard – the thickness and taper of the neck – the profile shape – the size of the frets – the type of neck finish.

The shaping of fret ends

Also such details whether the fretboard edge has been comfortably rolled off or how the fret ends are shaped will make a difference in how you experience the playability of an instrument. You’ll learn more about everything fret-related in another article of mine, right here. HOW TO CHOOSE THE RIGHT NECK SHAPE?

We offer various neck shapes for our guitars. It is impossible to say one of them would be unambiguously better than the others. It is largely a matter of taste. The neck can be flat, thick, round, wide, narrow… Some players are very specific how the neck must be shaped while others can have a wide variety of different neck shapes in their roster of guitars.

We don’t compromise the neck strength

We do have certain borders that we don’t like to cross, though. We refuse to make so flat necks that it would compromise the strength of the neck in the long haul. You can learn more about our neck shapes from the Guitar Creator.

Which fretboard radius is the best?

The fretboard radius has a direct effect to playability as well. The radius, together with fret size, neck shape, string height and other details define the ergonomics for your fretting hand.

Most of our guitars are made with 12-inch (305 mm) fretboard radius. This is a comfortable radius for playing open or barre chords, soloing and bending strings cleanly, maintaining low action all the way up the neck.

Our guitars mounted with Gotoh locking whammy are made with 16-inch (406 mm) fretboard radius, which matches the locking nut and trem perfectly.

In case you would prefer to order your Ruokangas guitar with some other fretboard radius, please ask. HOW TO DO A SETUP FOR MY GUITAR?

Is super low action the best?

It is obvious that the setup plays a key role in fine-tuning the elements of playability in a guitar. For some players it is essential to have the strings set super low, while others find such a guitar rather difficult to play, and need instead the instrument to “fight back” a bit more.

As in so many other aspects of a guitar, there is no right or wrong regarding string height or string gauge. The rest of the adjustments – truss-rod, intonation, pickup height etc – follow the chosen string height and gauge. Our online Maintenance Guide is filled with useful tips regarding the setup of your guitar. A great source to learn more!

Navigating on the fretboard

A small detail that also contributes to playability are the fret markers. We always install 2mm diameter dots of contrasting colour to the side of the fretboard – and for many players this is all they need to navigate on the fretboard in a relaxed manner.

Do I need fret markers?

Some players have gotten used to dots or other kinds of inlays on the face of the fretboard, and it’s a good idea to take this into consideration when ordering your custom guitar.

Listen to your heart

There is no small enough detail in a guitar, that wouldn’t in some way contribute to the whole. I firmly believe that when everything – the materials, construction, shapes, parts – all the big and small details are right, you will feel it – even if you wouldn’t quite be able to put your finger on why exactly does the guitar feel exceptional. My advice – just listen to your heart! 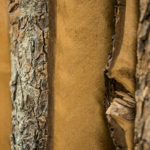 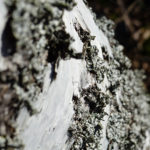 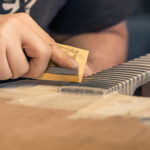 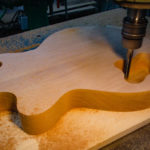 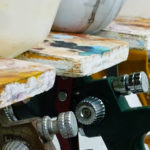 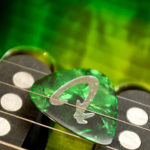 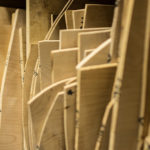