The severe nordic climate of Finland makes a difference. The dramatic contrast of our seasons forces the trees in our natural forests to adapt and grow slowly. The cold and dry winters are hard – but the trees survive, year by year stronger. Such conditions produce better wood for houses – better wood for furniture – better wood for guitars.

Birch, in all its varieties, is a very common tree in my homeland, growing from south coast all the way up to Lapland. The exact species (Betula Pendula Carelica) we’re interested in, however, is the rarest kind to find in the size and quality I seek.

I go to the forest and hand-pick the trees

The only way for me to find such wood is to go to the forests and hand-pick the trees I want. The logs are then cut down exclusively for me. We slice the wood, dry it, have it thermo treated and then finally we can grade it accordingly and we make guitars out of it. It’s a lot of work – but I’ve been stubborn enough to walk the extra mile.

Good only as firewood?

Figured birch used to be a desirable and sought after material among cabinetmakers and carpenters until 1920’s, when the new winds of architecture and design started to blow in the form of ‘functionalism’ and all of a sudden figured birch, this rare gold of Finnish forests, became boring and unfashionable. The industry wanted clarity and pure lines – so anything else than the plainest and cleanest birch was a no go. Figured birch became an outcast, mainly used as firewood – and not liked even at that, because it was so difficult to split with an axe… 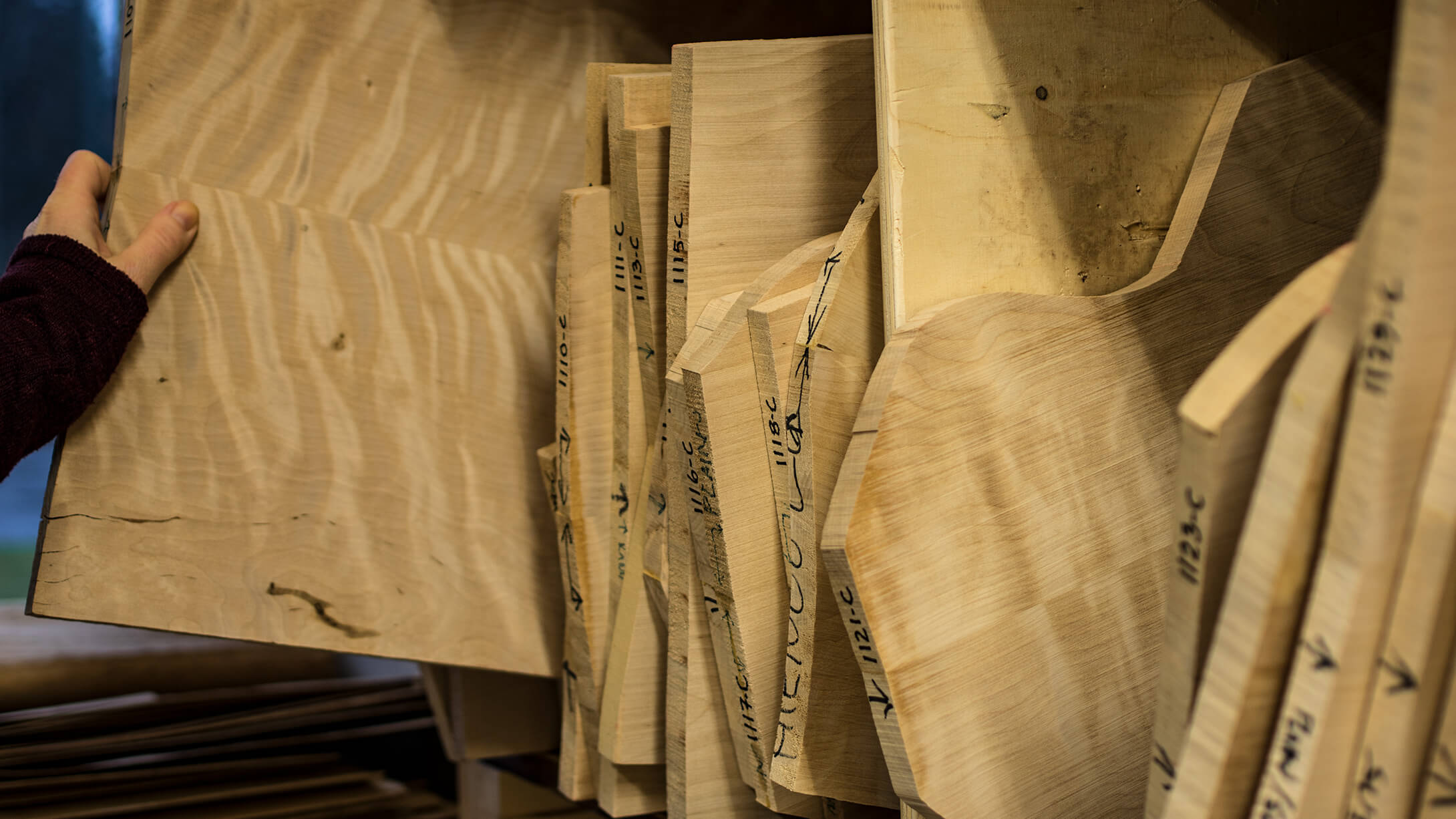 Finnish luthiers used birch for their acoustic guitar backs, sides and necks to substitute maple after the World War II, because importing fancy wood from other countries was practically impossible. The American tradition was however very strong, and later on when the availability became easier, maple was fast adapted as “the correct and acceptable choice” again.

A gift from a friend

When I studied luthiery in the early 1990’s, it was still very unfashionable to use birch in guitars. Birch was perceived ok for furniture and firewood, but not much else.

I got a very nice piece of figured birch in 1996 as a gift from a friend who built electric basses. He had experimented with birch too, but this particular piece was too small for his basses. It looked really nice, so I decided to make a Duke top out of it. It was the early days, and I was always broke, with practically no wood inventory at all, so I had to make use of every decent piece of wood I got my hands on.

When I finally strung up that Duke with birch top, it was like a revelation to me. The tone was so special. Deep velvety bottom end, articulated mids, shimmering highs. And the guitar was loud!

I totally loved the unique birch looks, too. Finnish birch has this unique, subtle “holographic shimmer” in it – quite unlike anything I’ve seen. Even the ‘plain’ graded birch has such glow. It’s impossible to describe by words – and difficult to show in a still photo. You need to hold the guitar live in your hands, turn it in light – and there it is. The tonewood with no name

I decided to offer figured birch tops as a custom option for the Duke, which was my only guitar model at the time. The first problem I encountered was the name of the wood. There wasn’t really any proper english term for figured birch, cause nobody used it for anything. And flamed birch – to me that sounded just… lame.

So I needed to invent my own trade name – and eventually I ended up calling my tops ‘figured arctic birch’ simply because it sounded cool. Later on I’ve learned that the name ‘arctic birch’ is also used about the very small tree (or shrub) growing up on the mountains in Lapland – definitely not something for guitars. But my self-summoned trade name stuck, and these days a lot of luthiers in Finland and elsewhere talk about flamed birch with “my name”.

Eventually I noticed that most of the Dukes I sold were ordered with birch tops, and somewhere around year 2005, I went exclusive with figured arctic birch tops, dropping off the flamed/quilted maple from our options completely.

For a long time, we graded our tops in four categories: plain, subtly figured, highly figured and exceptionally figured. Such categorization, however, isn’t a very intuitive way to communicate to you the true nature of all the different tops we have. Each top graded as it should be - individually

Each top is unique

Grading arctic birch is challenging, because the figuring can be so wild. Sometimes there are clearly ‘flamed’ pieces, but most of the time it’s some sort of a mixture of quilt, flame, curl, burl or some other patterns that don’t even have a name. Simply put, each top is genuinely unique.

So finally we have developed the current system, where each top is graded individually. The new way – which I totally love – is already in use in our Guitar Creator app.

This way we can offer some of our birch in better price-point than before, and on the other hand, the most exclusive pieces can also be valued more fairly, in direct relation to the actual rarity of the piece.

Not only for tops

Arctic birch works great also as a fretboard. When combined with walnut veneer in between a maple neck and a birch fretboard, I’ve found one of my personal favorite sounding necks of all time.

All birch we use is well dried and thermally aged. The carbon footprint of the birch we use is as small as it gets – the wood grows right here in our neighbourhood. Our birch comes only from sustainable sources. This wood species is not listed on CITES and does not need certification of any kind.